With puppies it is critical to ensure that you socialise them with other dogs from an early age to make sure that they grow into well balanced adult dogs. Socialising them well does not mean letting them play with every dog they meet in the park. It means introducing them to a multitude of other dogs of all ages, breeds, sizes and temperaments and guiding them to adjust their behaviour accordingly. If the other dog doesn’t want to play, hold your puppy back. If the other dog wants to play a fast, rough wrestling match, separate them frequently and make sure that they are get equal turns.

It is important to monitor their play closely and only allow them to play in a way that they are learning good manners. If at any point your puppy plays in a rough manner that you would not like them to do with every dog they meet, stop the play. Get in there and hold onto them or move them away with their lead. Wait until they have calmed down and the other dog wants to play before allowing them go back. Observe closely to see whether the play is equal, are they taking it in turns to chase each other, pin each other, play box with each other? Or is it all one sided? If it is, slow down or hold on to the puppy that is monopolising the play and give the other puppy a chance to take the lead. If play is not monitored closely, boisterous pups will learn to be bullies and nervous pups will learn to be scared of other dogs.

Have more confident puppies, or those learning recall, on a lead

If you’re on the receiving end of an overly boisterous dog and your puppy is not wanting to play, ask their owner to call their dog to them. If that doesn’t work, step in and, as long as you are comfortable with dogs and the other dog is friendly, block the other dog from your puppy (you might even take hold of their collar to keep them still).

Just the other week I saw a large Labrador puppy making a beeline for us across the park with no owner in sight. It ran full pelt at my dog and then began roughly jumping on her. My dog did not want to play and was trying to avoid the puppy’s advances. As the owner appeared on the other side of the field, I took hold of the puppy’s collar and held it until they reached us and took her. This was not a good experience for either dog. Without intervention, the puppy will learn that it is ok to keep jumping on other dogs who don’t want to play (which will, at some point, lead to them being told off, which could make them scared of dogs); my dog could, in turn, might learn to bark at and chase other ‘annoying’ dogs away. As a side note, I would have a puppy on a long line if they were likely to run the entire length of a field to play with another dog.

I am finding that there are many parallels between managing a puppy meeting a new dog and children meeting new friends. The other week, I took my two little humans to a soft play centre and my 3.5yr old boy was on the receiving end of unequal play. I am sure it will happen many times as he grows up, but it was horrible and I felt so sorry for him. He was playing, climbing and sliding when two boys of a similar age approached him and one started wrestling him to the ground. At first, he was laughing as he likes a bit of chase and play fight, but then they kept on doing it. The play was not even, it was all one sided and I could see that my son was no longer enjoying it so I stepped in and distracted them all onto another section of the centre. Over the next 15 minutes the boys repeatedly found us and pushed my boy around and blocked him going on equipment to the point that I had to go everywhere with him for fear he would have a bad experience. Eventually, with repeated avoidance (walking away), the boys got the hint and did leave us alone. In the whole hour we were there I did not see their parents, I couldn’t even tell you who they were sitting down in the cafe area. 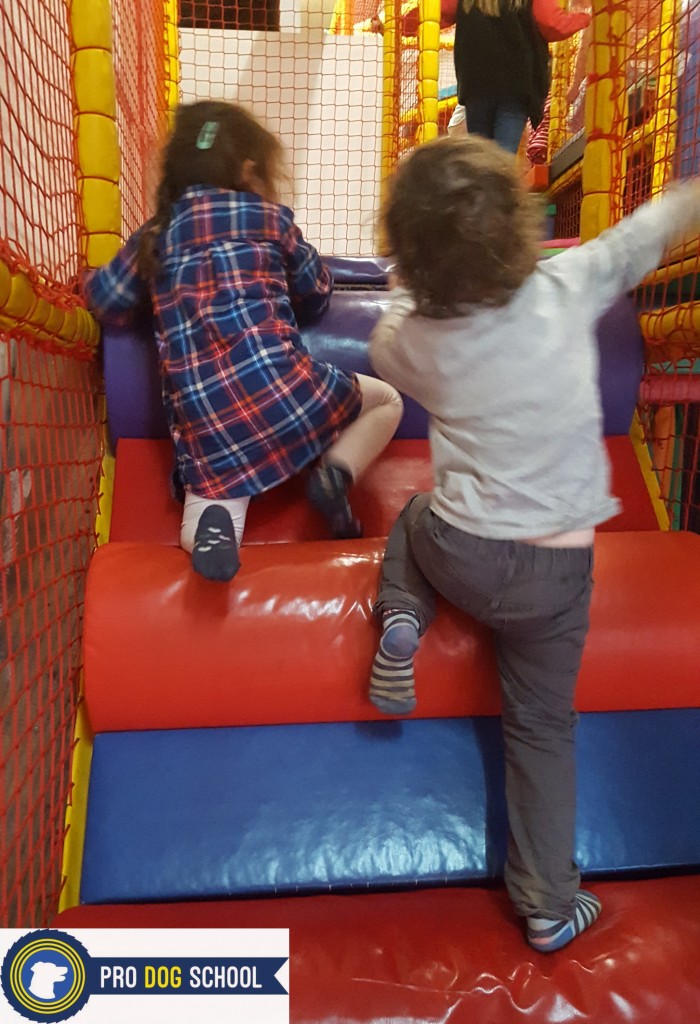 I am certain that these boys weren’t out to be mean, I think they were off in their own world of cops and robbers and weren’t understanding that my boy wasn’t playing. None of the children were learning good life skills. With repetitive incidents, over time, those boys may learn to be bullies; doing what they wanted without considering the other person’s feelings. While my boy could become shy and not enjoy playing with others.

In summary, make sure play is equal and all parties are having positive experiences.

About the Author: Holly Keeling. Dog Trainer in Sussex, England. Mother to furrbaby Leskie 5yrs and little humans Teddy 3yrs and Louie 1yr. Outdoor lover. A blog about raising kids and dogs and my life as a dog trainer. View more blogs here.

Holly Keeling. Dog Trainer in Sussex, England. Mother to furrbaby Leskie 5yrs and little humans Teddy 3yrs and Louie 1yr. Wife to Tim. Outdoor lover. A blog about raising kids and dogs and my life as a dog trainer.